Cellie: It’s Much More Than a Toy

Pop quiz: what looks like a stuffed gray and red tube sock, is soft and huggable, has a zipper for a mouth, and can help comfort children with cancer?

To be more specific, it’s the Cellie Cancer Coping Kit, a tool designed by Children’s Hospital of Philadelphia researchers to help children and their families manage the physical and emotional challenges associated with cancer treatment. In addition to Cellie, the namesake plush toy — or critter, as some of the researchers who work with Cellie call it — the kit also includes a pack of “cancer coping cards” and a booklet for caregivers.

Cellie was co-invented by Meghan Marsac, PhD, a behavioral researcher and director of training at the Center for Injury Research and Prevention (CIRP), and Anne Vinsel, MFA, a Salt Lake City, Utah-based artist and photographer. Dr. Marsac originally came up with the idea for the Cellie Coping Kit while working with pediatric cancer patients and finding that there was a need for additional resources to help children deal with stress related to cancer and its treatment.

CIRP staff who have worked with Dr. Marsac on the Cellie Cancer Coping Kit include Nancy Kassam-Adams, PhD, associate director of behavioral research at CIRP, and Aimee Hildenbrand, a first-year doctoral candidate in clinical psychology at Drexel University and a clinical research assistant at CIRP. In addition to having taken part in CIRP’s Research Experience for Undergraduates program, Hildenbrand has aided Dr. Marsac in her Cellie research for the past two years. Additional key Cellie team members include CHOP psychologists Melissa Alderfer, PhD, and Lamia Barakat, PhD.

Cellie is currently offered at no cost to cancer patients and their families receiving care at CHOP, with the goal of offering a kit to every newly diagnosed patient at CHOP. The Cellie Team plans to make Cellie available to children with cancer receiving treatment at other cancer centers as well. Currently, 1000 Cellie kits have been manufactured and will be distributed to patients in the coming years, said Dr. Marsac.

At its straight, zippered mouth the toy is approximately nine inches wide, and is roughly 14 inches tall. Cellie’s body is the gray often found in thermal socks, and its “limbs” are tipped in the same bright red that rings its mouth. In addition to being gender neutral, the critter was deliberately designed to be emotionally neutral, according to Hildenbrand, hence its straight mouth and heavy pink eyelids.

The Kit’s caregiver book contains information designed to help parents and caregivers help their child cope with cancer and tips for using the Cellie Kit. Meanwhile, the “cancer coping cards” — which are designed for children — present coping strategies for a range of topics, from treatment side effects, to dealing with needle sticks, to stress reduction techniques. For example, one card reads, “I get sick (throw up, headache) on the way to the doctor’s,” and includes coping tips such as:

Both the booklet and cards are color-coded by topic — yellow for “communication,” purple for “school and friends,” and so on — and each card features pictures of Cellie, or several Cellies, engaging in some of the suggested coping strategies: playing videogames, listening to music, squeezing a stress ball, and drawing, to name a few.

Dr. Marsac and her team recently published a study in Supportive Care in Cancer on the Kit’s effectiveness, finding that the kit “is an engaging, helpful, and easy-to-use coping tool for families facing pediatric cancer treatment.” The research team recruited a number of current Children’s Hospital patients and their caregivers to assess the feasibility and acceptability of the Kit, and found that, overall, the tool has been well received by patients.

“I would use him wherever I go. I would bring Cellie with me to the hospital … he (would be) my buddy …and help me out,” one child who participated in the study noted. “I sleep with Cellie. I keep her with me when I’m getting the needle in. Cellie’s the bomb … it helps me a lot,” another child said.

Parents who took part in the study also had positive things to say about the Cellie kit, pointing out that it helped them talk about cancer with their children. The Kit “made us more comfortable talking about,” cancer with their son, one parent said, adding that before receiving Cellie “there were a lot of things we probably wouldn’t talk about.”

Additional studies to evaluate adapting the Kit for other pediatric populations— such as sickle cell disease — are currently underway. The CIRP team is considering which illnesses, or injuries, would be appropriate to target, but they would “likely be the kind of thing where there’s some ongoing stressors,” noted Dr. Kassam-Adams.

Cellie is “creative and wonderful and really speaks to kids’ needs,” but what has been really impressive about the project has been the introduction of “rigor to the development” of the Kit, said Dr. Kassam-Adams.

Let’s face it: we live in the future. At no point in human history has so much information been so accessible to so many people, and gone are the days when specialized information was only available to those privileged few who had the resources to attain it. The rise of the personal computer, then the internet, and then smartphones that (in addition to functioning as phones) can browse the internet from anywhere, means that more people than ever have access to more information than they could ever need.

It also means that patients and families, not to mention researchers, have access to more detailed health information than ever before. Alexander G. Fiks, MD, MSCE, co-medical director of The Children’s Hospital of Philadelphia’s Pediatric Research Consortium and a PolicyLab faculty member, works to best make sense of, and use, the wealth of health information available clinicians, researchers, and families.

Dr. Fiks initially joined Children’s Hospital as resident in 1997, shortly after his receiving his MD from Harvard in 1997. In 2003 he was awarded an MSCE from the University of Pennsylvania, and in 2006 was appointed Assistant Professor of Pediatrics at CHOP. He is currently co-principal investigator of an American Academy of Pediatrics electronic health record-based project, “Comparative Effectiveness Research Through Collaborative Electronic Reporting.”

The project, also known as CER2, is a partnership between Children’s Hospital and networks based in Boston and Cleveland. CER2 investigators plan to use from approximately 800,000 pediatric patients to conduct long-term comparative effectiveness research on the side effects of medication in children.

In addition to his role in CER2, Dr. Fiks has been focused on developing and testing shared decision making (SDM) tools to help families make informed, engaged care choices. SDM is a method of making treatment decisions wherein doctors and families make choices together by actively communicating and contributing their knowledge and preferences, respectively, to the decision-making process.

An approach to healthcare that is being used increasingly in adults, SDM “has been shown to lead to more successful treatment outcomes for patients and increased satisfaction among physicians,” said Dr. Fiks. He was recently the lead author of a study published in Academic Pediatrics that evaluated a questionnaire used to help parents of pediatric patients make improved attention deficit-hyperactivity disorder (ADHD) treatment decisions using SDM.

Dr. Fiks has also been working with Robert Grundmeier, MD, director of clinical informatics at the Center for Biomedical Informatics (CBMi), on the development of an interactive SDM “portal” that patients can use at home. Dean Karavite, MS, lead computer interaction specialist and an expert in human computer interaction at CBMi, has been overseeing the design and testing of the portal.

The portal, known as the “Shared Decision Making Portal for Pediatric Chronic Illness,” works with Children’s Hospital’s new MyChart patient site, which is currently being rolled out to the entire CHOP network and was originally developed by Dr. Grundmeier. By providing access to portions of medical records remotely, MyChart allows families to request appointments, view test results, and access health summaries and growth charts. In effect, MyChart replaces the telephone, Karative said.

Drs. Fiks and Grundmeier’s portal is a modification of MyChart that greatly expands MyChart’s capabilities. While the pilot version of the portal is focused solely on asthma, Dr. Fiks and his team hope to eventually introduce versions geared toward other diseases, such as ADHD.

The portal contains a number of features that families can interact with. For example, the portal allows parents to fill out monthly symptom and care surveys, which can help free up time in the examination room. The system will send families regular reminders to fill out these care surveys, and through the portal doctors will be able to see detailed timelines of how their patients are progressing.

The portal also contains an extensive library of educational materials about asthma, including videos, materials geared toward children, and literature on symptom triggers such as cigarette smoke and dustmites. There is also a version of the portal for doctors that they can use to view detailed records, fill out assessments, and “assign” educational materials for patients to view.

“Research shows that patients adhere much better to the treatment options that they are comfortable with and that are the most practical for them,” Dr. Fiks said, pointing out that “choosing a treatment that doesn’t “fit” can lead to unsuccessful results.” Overall, projects like the new portal, that use the wealth of information available to doctors and patients, make families “active partners in care,” he noted. 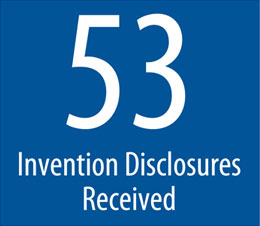 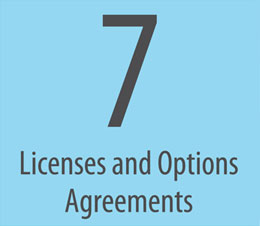 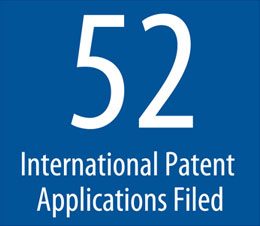 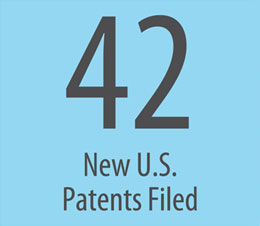 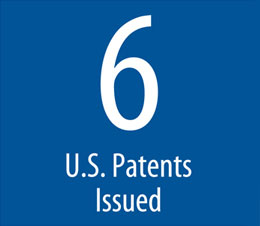 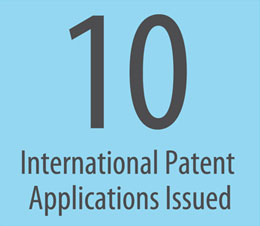 This patent involves a method of decreasing the number of HIV-1-infected cells through administration of an inhibitor of the HIV-Associated Life Preserver (HALP) protein. In this case, the inhibitors are anti-sense RNA molecules.

This is part of the patent family that protects the CHOP intellectual property surrounding use of adeno-associated virus vectors plus Factor IX to treat hemophilia.

This is a design patent that protects one of the versions of the doll that is part of the Cellie Cancer Coping Kit.

This patent is part of the patent family that provides methods of preventing formation of inhibitory antibodies in mammals undergoing gene therapy by administration of immunosuppressant drugs at the time of the administration of the therapeutic vector.

Testing the levels of PRRG4 and PRRG2 molecules can detect predisposition to colon cancer and provide insights as to tumor presence and stage. Levels can also be used in tumors of the lung, liver, breast, pancreas, etc. This is a blood-based test and may be a reasonable substitute for current methods of detecting colon cancers.